Honda's RBB K24A engine is a perfect upgrade compared to the K20Z3 in a daily driven 2006-2011 Civic Si. While the engine does not maintain the square bore/stroke ratio that allow the K20's to easil achieve 10k RPM glory, the added torque (+ 30 lb·ft) due to the deep stroking 2.4L adds a perfect upgrade for a daily driver. Sharing the same intake manifold mounting pattern, coolant passage design, and many core part designs allows it to be transformed into a powerplant for the 8th gen Civic Si that maintains stock hoses, intake, wire harness, and exhaust.  A perfect Honda coincidence.

Like it's USDM K24A2 counterpart the JDM RBB K24A comes in two major flavors 2004-2005 and 2006-2008 variations. The 2006-2008 variant is sought after due to improvements in connecting rod strength, under piston oil squirters, and camshaft design. In fact the 2006-2008 have been shown to have a VTEC lift deeper than K20 Type R camshafts. Both variation have longer duration on primary, secondary, and VTEC lobes as compared to the high perfomance K20 variations.

The hunt for a new engine began when our daily driven 8th gen Civic Si K20Z3 began getting tired. At 223,000 miles the engine began eating lots of oil, as well as  exhibiting signs of compression loss and detonation. Surviving on the original clutch the car was ready for it's next chapter. As a daily driver it needed a refresher before it began to be unreliable.

One of the big benefits of modifying Japanese cars is the availability of not only USDM components but also having "easy" access to JDM parts and engines through importers. For a gearhead there might not be a better place to dream and explore than your local JDM Engine Depot. From Nissan's Turbo RB26's to Honda's economical and affordable D16's, most Japanese Market engine importers have what you need to bring your car back to life or to breath new life into your creation. But it's not always easy picking the right one ... 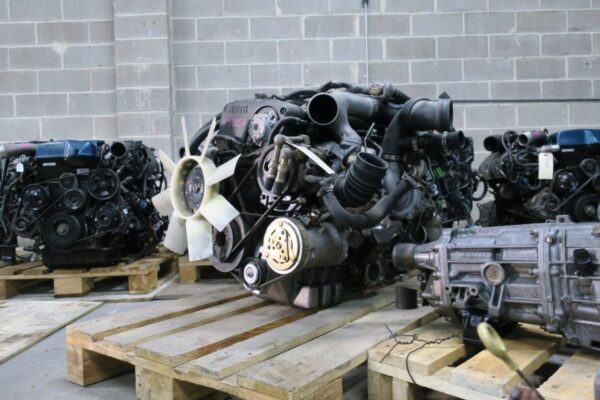 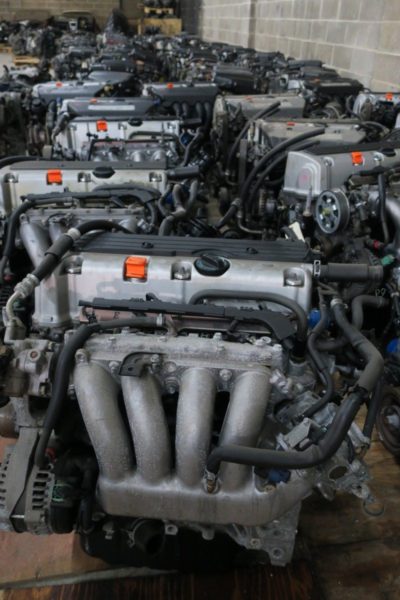 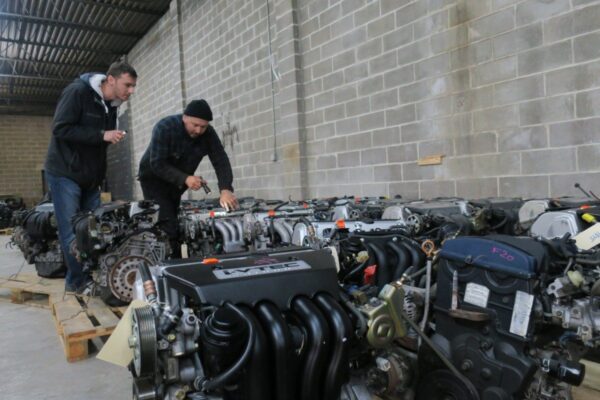 Purchasing an engine from a JDM Engine depot can be a big game of chance. Most JDM Engine Depos claim the engines have 45-60k miles. But having never seen the engine run or observe it's operation makes it hard to pick the perfect one. And no one wants to invest time and money converting an engine to the chassis just to take it back out because the engine was not as healthy as advertised.

The first step is to trust the Engine Depot that you are about to give money to. We have worked with JDM ENGINE PA in Philadelphia before for our Green Machine track toy. They helped us source a high grade replacement engine quickly when our B20 blew up on the opening day of the 2017 season. So after deciding to K24A swap our FG2 Civic Si we were back to  JDM ENGINE PA in Philadelphia to source our perfect K24A. 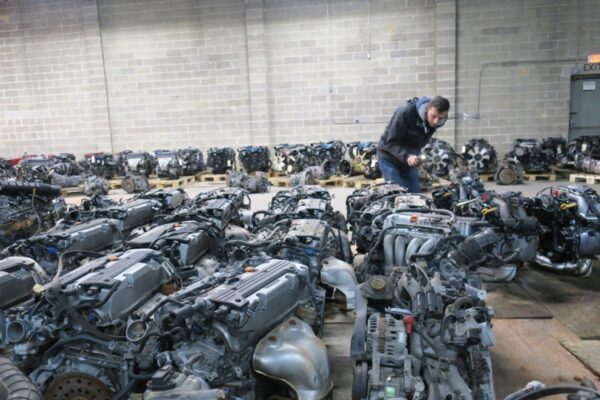 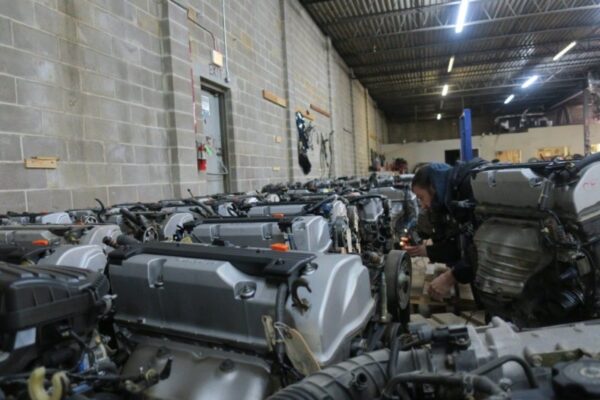 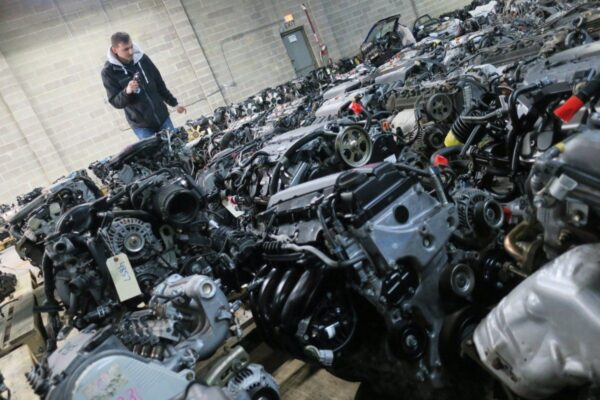 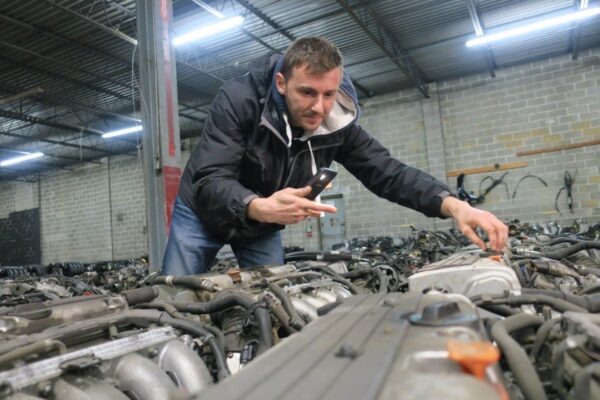 How do you choose the perfect engine if you can't hear it run, know it's history, or anything really about the motor? There are a number of key factors that can be tell-tale signs of engine health. A good engine importer that values their customer base and stands behind their product will let you look through their selection to find your next motor.

Compression test can be easily performed on an RBB with a compression gauge, Jump Box, and a manual transmission flywheel. Most RBB's will have the starter motor still mounted to the block. The throttle body should be forced open when conducting a compression test.

Check out Speed Academies Video on how to perform a compression test on an engine when it is out of the vehicle. 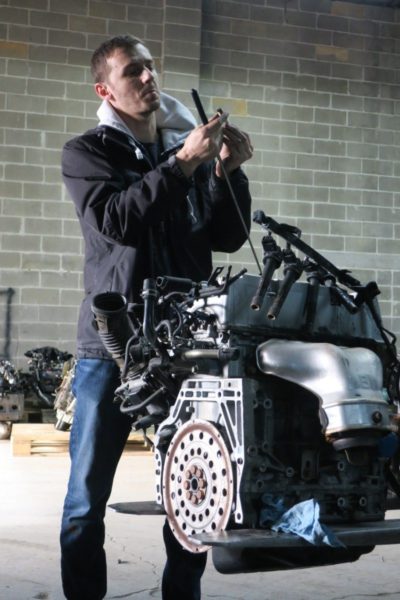 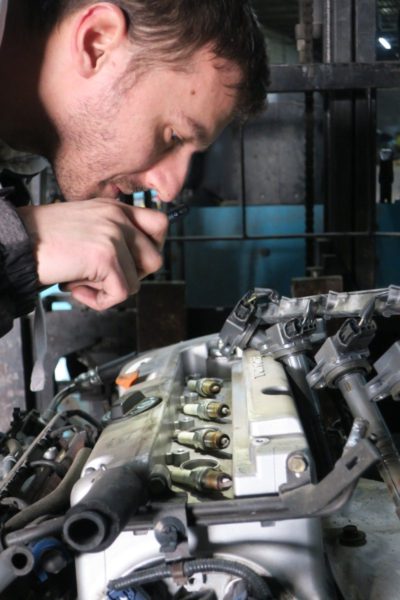 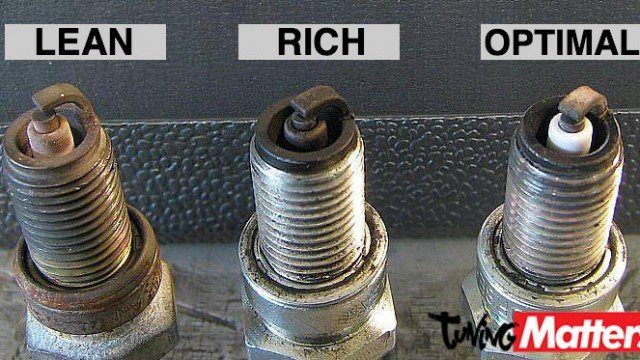 Inspecting the valve train through the oil fill hole, around passages to the oil filter, or under valve cover can reveal a lot about how the previous owner maintained the engine. An engine that has been maintained with regular oil changes should show minimum staining on cast aluminum surfaces.

Look for metal particles and bearing pieces in the oil pan and deposited in the oil filter for signs of bearing wear and failure. Inspect carefully.

We pulled the valve cover too, to check for proper wear on the cam lobes and to inspect for visible damage to valve spring retainers and lifters. 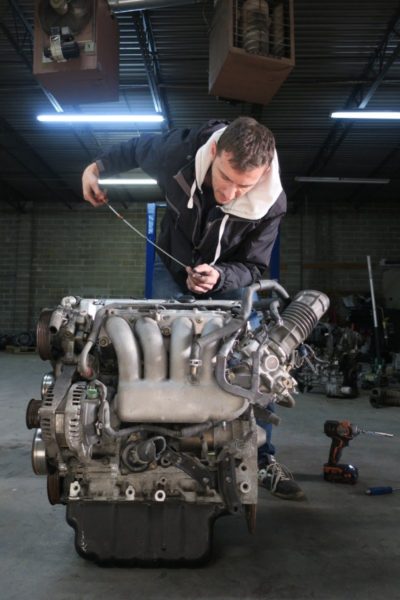 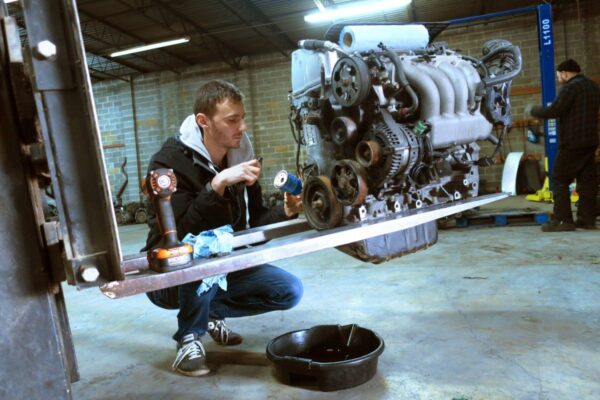 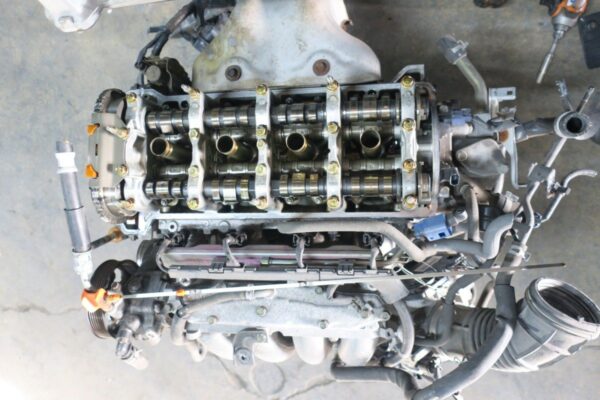 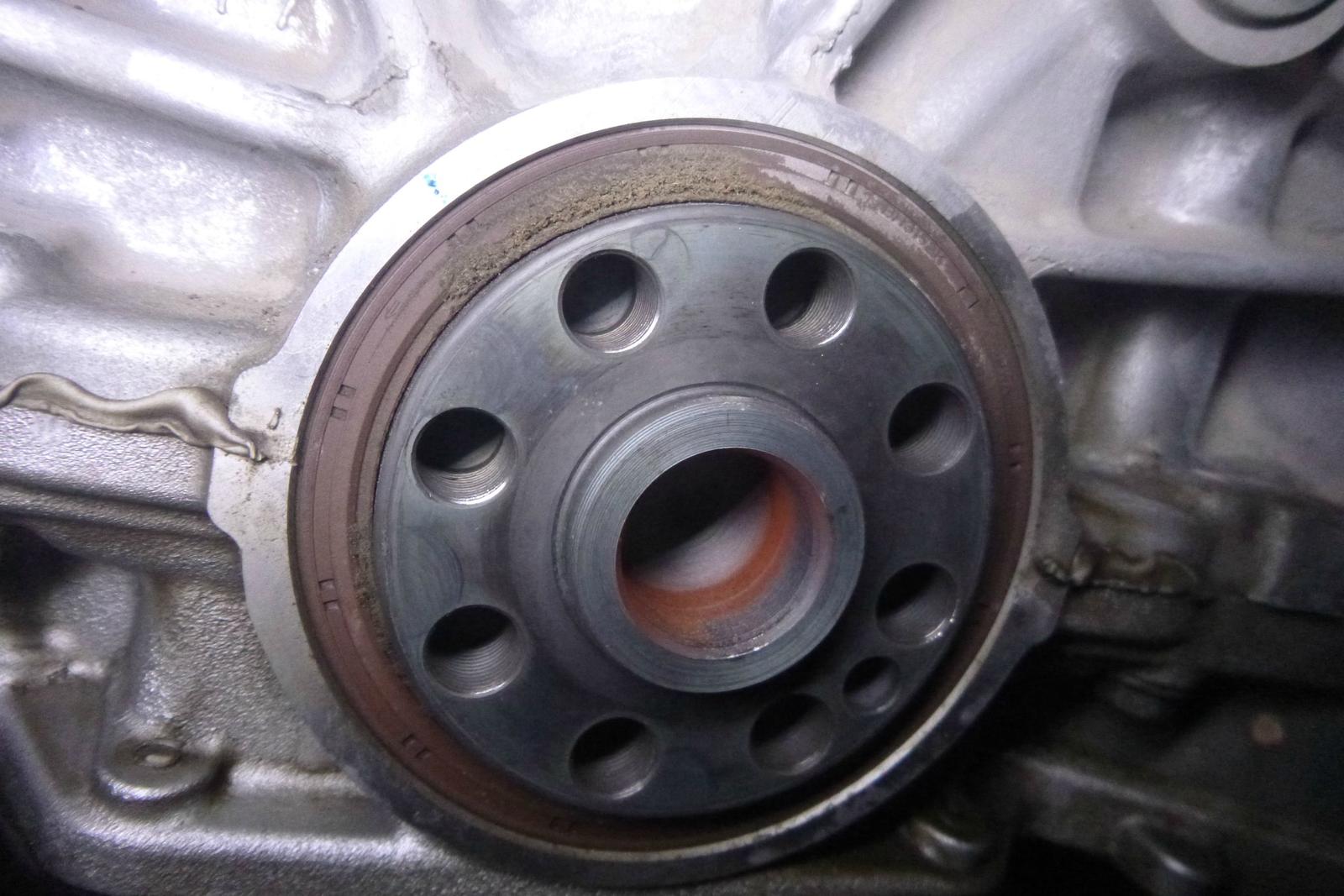 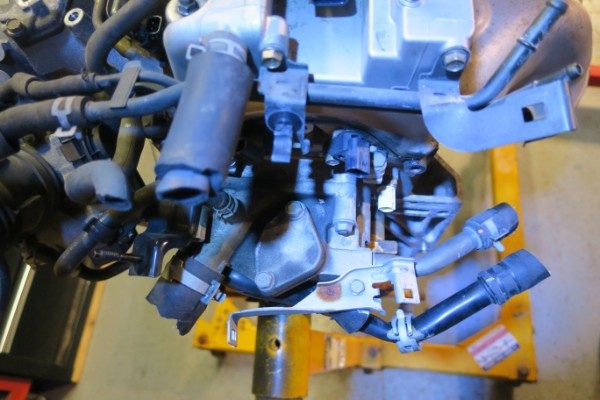 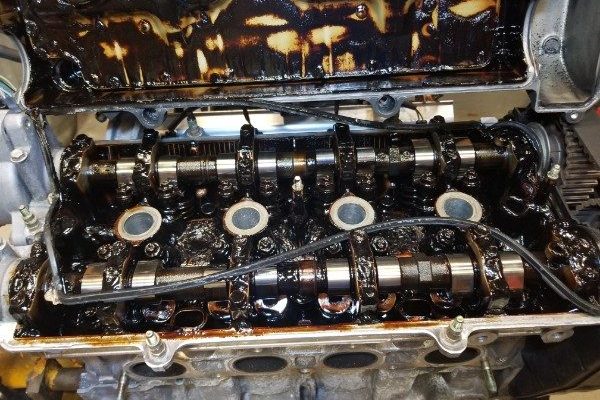 Luckily we were able to find a motor that met all our criteria for condition. It's easy to get trapped in constantly looking for the perfect motor. But the engine had good compression, dry consistent looking plugs and cylinders, with no signs of abuse or neglect. It was time to bring our Chosen One home and begin the swap process. Let the wrenching commence !! 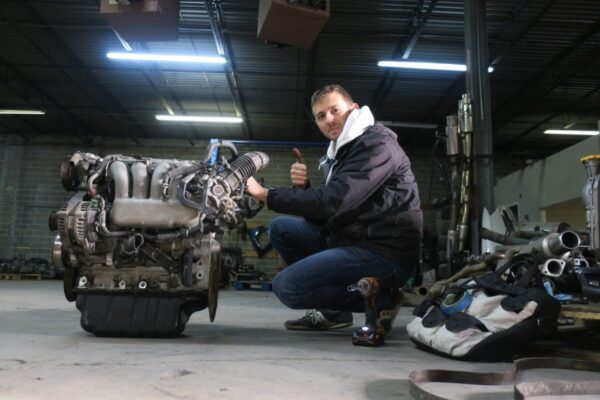 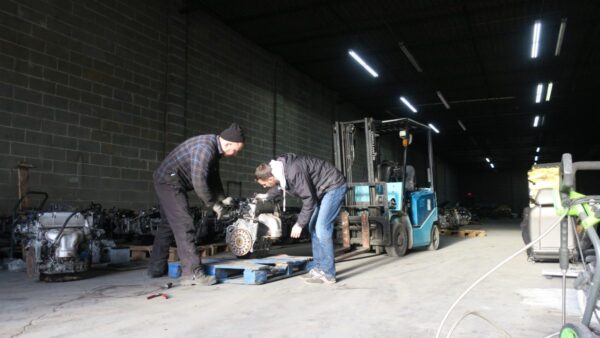 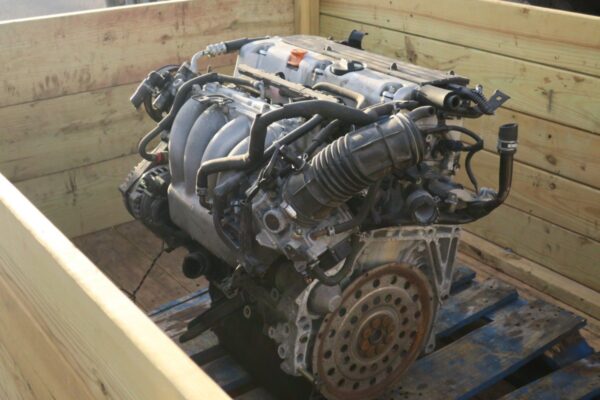 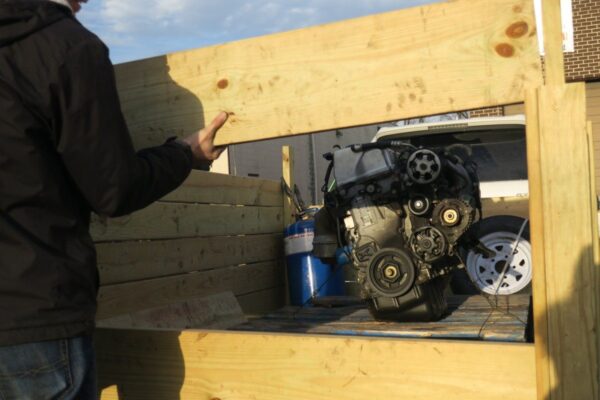